Piers Morgan of the Daily Mirror narrates over this edited interview of Michael and first  is asking about his new album.

MJ:            Yes I’m right in the middle of the album.  I’m half way through and it’s just a calvacade of wonderful songs and I’m putting everything I have into it.  I’m putting my heart into it because I’m not sure if I’m going to really really do it again. This may be my last one as far as an album.  I may do – the next is doing soundtrack albums. Soundtracks and films but not just straight out pop albums.

What does MJ hope his new album will achieve?

Asked about his amazing surprise appearance in Fulham on Saturday.

MJ:             You know, I know nothing about sports and Mr. Mohamed Al Fayed taught me so much and I enjoyed myself so much at Fulham that now I am a fan and I’m addicted already and you may see me more often at the games.  I thought it was amazing! I was astounded by it. I mean  I had to ask a couple of questions because I didn’t know the rules at first but once I caught on I thought it was really, really, really fun. … everybody screamed and yelled (Yaaaa!) I kind of got the jitters but it was wonderful it was just great. It was this weird thing when I heard them scream, I wanted to stand up and start dancing. I’m used to hearing people scream when I perform. (laughs)

Michael was a big fan and a close friend of Princess Diana. Michael was asked how he felt when she died.

MJ:            I had a concert that day when the news broke and the doctor woke me from sleep and he told me the news as soon as I woke up and I literally collapsed and they had to give me the smelling salts and everything and I cancelled my concert because… and I just wept for weeks and weeks about her and Dodi because I thought it was a match from Heaven. I thought they were beautiful together so why shouldn’t they be together? It was lovely, just lovely and her heart – what she did going around the world, you know, being the philanthropist she was like Mother Teresa and I just thought she was a wonderful wonderful person. She proved that she really, really cared, it wasn’t just talk she really did care about people and children. The way I do, the way I do. Quite often she would call me on the phone and we would talk in private because the press were hard on her the way they are hard on me – the same way, so she needed a soulmate to talk to and she felt hunted, the way I felt hunted, you know?  And she needed someone to talk to and she called me quite often to talk about it.  It’s the saddest I felt, I’ve never felt that kind of mourning since Kennedy was killed. It really broke my heart and I cried so much.

We asked Michael what he and Diana used to speak about.

MJ:            To generalize, it was about how we shared the same feelings about problems, the next door neighbor, they don’t know what it’s like and I’ve had it since I was a little bitty kid. She was just suddenly thrust into it so her emotions were a little different than mine but I’ve had it all my life. I said “rise above it, rise above it”.  I’ve gone on stage in the worst pain.  I’ve gone on stage with toothaches and I rise above it mentally.   I told her just to rise above it and be strong, be determined and, you know, nobody can hurt you. Only you can hurt yourself and be defiant, be defiant.

Michael was then asked about the impact of being a father has had on his career and whether he had any ambitions for his children.

MJ:            I think about the children a lot and what I want them to do but they have to pick their own career but I would love to direct them in the arts. You know just directing and films.

Michael told us that his children particularly like his sister Janet Jacksons records. We asked him which songs in particular that they like and he spontaneously burst into song.

MJ:  The Knowledge, Rhythm Nation any of the (starts beatboxing) all the songs with great grooves you know?

We asked Michael what his reaction was to the crisis in Yugoslavia.

MJ:            I have to turn the TV off, I cry every day but that’s not enough to turn your head and pretend that it doesn’t exist, I want to fly down there if I could.  I would love to fly there and see and help and do and create.  I’m a giving proceeds to those refugees for the families.

MJ:            Yeah, I wrote a song “What More Can I Give” that I want to put all the stars together and if I could do it here in Britain it would be great. Maybe I should do it in Britain.

MJ:            It’s called “What More Can I Give” I wrote it and I want to give the proceeds to the families of Yugoslavia. Maybe I should do it here instead of America and get all your celebrities in England and if the Americans want to fly down too.  One of the things I didn’t like about “We are the World” song that I wrote was I didn’t like the idea “USA for Africa” it was like it was discriminating the rest of the world. I asked for the Bee Gees and I asked for other groups and they said “they weren’t born here” I said “I don’t care! I just want the world to show that they care”.  I mean I am not into politics and I don’t talk about religion and politics but I think it’s totally ignorant and it’s wrong to hurt people, to hurt innocent children over some political issue? I think its genocide; I think it’s wrong.  Ethnic cleansing? It’s ignorant, it’s stupid.

We then asked Michael for his love for the UK and whether he had any plans to move here.

MJ:  I would love to live in London and I love it so much it’s just the press is so hard on me here and I try to do so good.  I go to the hospitals and give presents to the children and as soon as I leave the next day they go “Wacko Jacko left the hospital and he ignored all the children” and it hurts my heart because purposely I flew Minnie Mouse and Mickey Mouse all the way from Euro Disney and I brought them with me to surprise the children and I brought bags of presents and everything.  I spent time with the kids and they made fun of me.

Next Michael spoke emotionally about his feelings for the work he does with children.

MJ:            I’m very touched by it.  If it wasn’t for children (begins to cry) If it wasn’t for children I would throw in the towel. I would kill myself, I wouldn’t care to live.  They give me my inspiration, they give me. . . they inspire me. Everything I do, every song I write, the dance, everything I do.  They try to use it against me and it’s just been so unfair and I’m very upset about it, you know.

We were interested to know if the critical pressure on him had eased up lately.  Have the critics backed off at all?

MJ:            Well they need to (chuckles) they need to because I’m just a person who wants to be honest and do good and make people happy and enjoy the greatest sense of escapism through the talent that God has given me, you know?  That’s where my heart is.  That’s all I want to do, that’s all.  I just want to say  “Look, leave me alone and let me do what I want to do” which is share and give and put a smile on people’s face and make their heart feel happy.

We then asked how Michael would feel about people who would suggest he would ever harm a child.

MJ:  I would slit my wrists before I would. Could never. Ever.

Another of Michael’s great fans is Elizabeth Taylor. We asked him to tell us a little about his friendship with her.

MJ:            I haven’t seen Elizabeth but I saw her right before I left because she is Prince’s Godmother and so I get to see her quite often and I take Elizabeth to the movies every Wednesday, I mean every Thursday in America.  Yes.  You know I have Warner Bros. Studios put aside privately for us but she doesn’t want to go because I’m a recluse and I don’t like to go out, so she forces me.  She’s the only person that can force me into the public. So we walk right in and by the time the movie is over we have a crowd of people applauding us. 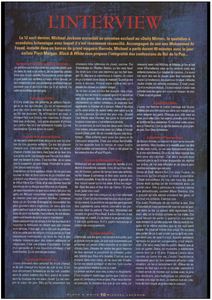