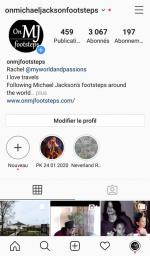 Bellamy : You, Janet, and the video [Scream] have been nominated for 11 MTV Music Video Awards, and that hasn't happened in the last decade. How does that make you feel?

MJ : Very, very honored, and I am sure Janet is too. We have worked very hard on it and to reap the fruits of his type of thing is a wonderful achievement. I am very, very happy.

Bellamy : It's awesome! When I watch the [Scream] video, there's so much energy in the video; you guys are just like electric. What was it like working together, doing it, the dancing and the whole thing.

MJ : It was great because we love to dance and to get to dance with my sister reminds me of old times, cause it allowed us to play and goof off and throw stuff, and it was fun. The 'making of" is as much fun as seeing the real short.

Bellamy : You guys have to do another video for us [fans], 'cause we are loving it, man.

Bellamy : When we look at your videos, they are every innovative, they are always on the cutting edge. How much are you involved in the creative process of the videos?

Bellamy : Of all your videos, when you think back on it, what is Michael Jackson's favorite video?

MJ : My favorite? Hmmm, probably something like Thriller to Smooth Criminal, I like kinda rough edge. We're gonna do more of that kinda stuff.

Bellamy : Oh, yeah [with excitement].... Michael, you're an artist known for producing your own material, but you also collaborate with a lot of others. How do you choose who you wanna work with?

Bellamy : Who would you like to work with that you haven't worked with, yet?

MJ : It would probably be somebody like Tchaikovsky or Claude Debussy - an artist that isn't around any more.

Bellamy : Who were some of the people that you collaborated with on HIStory?

MJ: Yes, Shequille O'Neal, of course! He was great.

Bellamy : He was really nervous, you know. He couldn't believe it, he wanted to scream, he said.

Bellamy : On the new video [You Are Not Alone], is a song that is written and produced by R. Kelly. How did you guys hook up?

Bellamy : It's a truly beautiful song. I mean, the first time I heard it, I liked it immediately. I mean, was it the same type of impact when you heard it too?

MJ : Yeah, for me, I always have to hear it twice.

MJ : Even when I love it, I wanna hear it again. But I loved it!

You Are Not Alone video is shown.

Bellamy : We rocked that, baby! [they shake hands]